Many supermarkets and farmers markets are welcoming the hybrid Tomato Varieties which were "Void of Old Fashioned Favor" and  "Pure Nutritional Value", "licking of Pure Smell and Taste".   So some hybrids are good to have around if the are open-pollinated.
Major hybridization programs were started to breed tomatoes and different vegetables to uniform size and shape with a thicker skin to withstand shipping and cold weather.
Around 1940, major developments were made in our highway and railroad systems to transport hybrid tomatoes with many new generation of Americans losing the ability to grown the same plants grown by their parents.    Setting the hybridization goals to develop brighter red color, develop varieties that ripened at the same time and develop many tomato varieties resistance many diseases and pests.
Many Botanist like myself committed themselves in reviving the old varieties of heirloom tomato and heirloom vegetables.   It’s became Angel Field Mission to collect and understands all Native Americans Tomatoes and Vegetables.   My research shows forth, Native Americans and Hawaii Native Americans have only lost 20 % of their natives’ fruits and Vegetables.  With 20% lost only by some Americans Botanists renaming of Natives Plants, like the Aunt Molly' Ground Cherry.   But I am very thankful to Aunt Molly for keeping this ground Native Green little Cherry Historically Tomatoes safe and sound to be identified by the USDA as a Natives Americans Ground Cherry.

About 80% of the world historical tomatoes and vegetables varieties available in 1910 are "extinct" until pure seed researchers like me started collecting and safeguarding our pure food supply.   Many private collections were safeguarded by Natives Americans.   Heirloom Tomato like that Cherokee Purple and Indian Stripe Tomatoes are just finding their way back to the farms and garden across America.   All Farmer who farm heirloom vegetables like we do there at "Angel Field", are very committed because these precious plants are like babies, needing extra love and tender care; throughout their life cycle.  Because of their nutritional value along, is worth the hard labor.
Our selection of heirloom seeds is grown with protection covers letting sun in and pest out, protecting each plant Pure DNA.

Angel Field Research will continue to bring you traditional varieties grown by Native Americans, Mennonites, and Amish.  Recently, there have been imports of heirlooms from Russia, Germany, Italy, France, and Czechoslovakia.  Also seeds from the Creole, who the West Indies, refers to as descendant of any European settler, but some people of African descent also consider themselves to be Creole.

You may contact us about new varieties each year because as we continues to collect new pure varieties you would love to grow in your garden.     Angel Field Research will continue to bring you traditional varieties grown by Native Americans, Mennonites, Amish and Hawaiian natives,   Recently, we have collected heirloom fruits and vegetables from Russia, Germany, Italy, France, and Czechoslovakia. 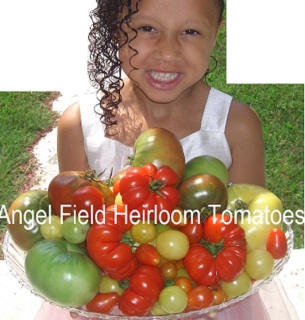 Angel Field Heirloom Tomatoes seeds are a mix of over 30 varieties of Heirloom tomatoes grown in Hampton Virginia to give everyone the needed opportunity to enjoy these beautiful Heirlooms Tomatoes, during these hard economic times. Your new venture of growing heirloom tomatoes for the first time will save your money while you learn. My Heirloom Tomatoes Seeds are not separated, but combined together to enjoy a beautiful surprised of Rainbows Heirlooms, at a "Very" low cost of growing many different varieties, to including cherry tomatoes. Red Brandywine, Black Bell, Ace 55, Kentucky Orange , Red Homestead, German Johnson, Cherokee Purple, Watermelon Beefsteak, Pineapple, Beefsteak, Mortgage Lifters, Pink Brandywine, Great White Beefsteak, Small Red Cherry, Amish Salad Cherry, more..